lfranklin Posted on April 25, 2021 Posted in Police Reform No Comments 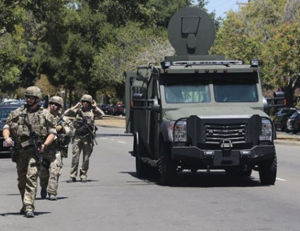 The Berkeley PD continues to amass military grade equipment such as tank-like armored vehicles and assault rifles disproportionately targeting people of color. Urge Berkeley City Council to vote for strong accountability and transparency around how this equipment is acquired and used!
1. Go to bit.ly/berkeleypolice to sign petition and write to the Council
2. Speak at the Council meeting at 6pm on Tuesday, April 27th at 6pm: https://us02web.zoom.us/j/82895393673

Talking Points on Berkeley’s proposed ordinance on militarized equipment:
Background (see FAQ here): After last summer’s uprising against racism, when police used tear gas, less lethal launchers and other militarized gear on protesters in many locations, Berkeley City Council Member Kate Harrison proposed an ordinance to regulate BPD’s acquisition and use of such war-like gear. Council referred the ordinance to the PRC, which appointed a subcommittee and refined the ordinance’s language over six meetings, and to the Public Safety Committee, which finally passed the ordinance to Council on March 29.
On Monday March 29, the City Council’s Public Safety Committee (CMs Bartlett, Wengraf and Kesarwani) forwarded the militarized equipment ordinance to the full City Council, but with several muddled requests that the Council redefine reporting on uses of assault rifles, 40mm projectile launchers and long batons and to exclude LRADs from the ordinance. The Committee recommended removing LRADs from the ordinance. It even asked the Council to reconsider the inclusion of assault rifles, 40 mm ‘less lethal’ launchers and long batons, based on the erroneous claim that Berkeley’s use of force policy requires duplicate reporting on those weapons. (Kate Harrison did not accept these changes, which also contradict the PRC’s recommendations, which also will be before the Council.) Removal of all these weapons from the equipment regulated by the ordinance would effectively eviscerate it.
The proposed “Controlled Equipment Ordinance” is similar to Berkeley’s surveillance equipment ordinance. It is also similar to an ordinance considered by Oakland and a statewide bill, AB 481, that would create the same process for military equipment used by police across California. The ordinance is also supported by the Alameda County Labor Council.
The weaponry and equipment controlled by the ordinance is mostly used against protests and in SWAT operations – where it is typically not visible except to the households subject to the operations. Militarized equipment amplifies the racial disparities in overall BPD operations. Yet we know little about when militarized equipment is used by BPD, because reporting on its use either doesn’t exist or is hidden. Based on its comments during PRC and Public Safety meetings, BPD clearly does not want to report publicly on how often and where it brandishes assault rifles, project launchers, LRADs or long batons.
BPD instead claims that use of these weapons is already reported in use of force reports. The Police Review Commission considered this baseless claim of duplicative reporting in January and dismissed it in a unanimous recommendation. For details, see my analysis and Kitt Saginor’s analysis of this claim.
Above content from American Friends Service CommitteeCalifornia Healing JusticeCell 510-282-8983