Note: This history was written by David Mundstock and republished here with his permission. The opinions in this piece are his and do not necessarily reflect the positions of BCA members. For original link go to http://www.berkeleyinthe70s.homestead.com.
1. November Beats April (1982)
Marty Schiffenbauer personally drafted and collected nearly all the signatures for an initiative charter amendment to move Berkeley’s general municipal election from April to November of even-numbered years, when it would be consolidated with the state general election.  This change would increase the turnout of students, tenants, Democrats, and low-income voters, giving BCA candidates a major advantage over ABC/BDC.  It also shortened the terms of BCA incumbents elected in April 1979 and reduced election costs.  The dramatic impact of Marty’s initiative was not well understood by the leadership of either side.

The election date change was approved by the voters in June 1982 with BCA support and relatively mild conservative opposition.  In November 1982, this new municipal election date immediately produced the desired results.  Gus Newport was re-elected Mayor over Shirley Dean and BCA won 3 of 4 Council seats, coming very close to a sweep.  The conservatives only elected one candidate, but that was enough to retain a 5-4 Council majority.

2. November 1984 Election
The November 1984 Presidential election – Reagan vs. Mondale.  BCA was the Mondale Campaign in Berkeley, as part of a strategy to help the BCA City Council candidates benefit from the expected massive anti-Reagan turnout of Democrats.

Having learned from November 1982, BCA concentrated upon persuading these extra November voters into casting ballots for the entire ticket, which meant the BCA Council slate on this poster, prominently labeled “Democrats for Berkeley”.

Having won four seats in 1982, victory by only a single candidate this time would mean a BCA majority at last. The BCA slate consisted of attorney Don Jelinek, who had been a civil rights movement lawyer in the south 20 years earlier.  He was also famous for saving the Ashby Bart Station Flea Market from being evicted.  Don also displayed humor, a rare quality in Berkeley politics. 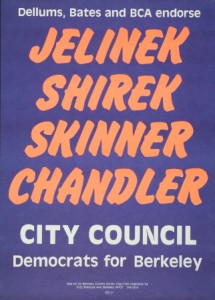 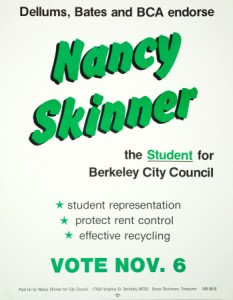 Maudelle Shirek, is the ultimate survivor/mentor of the progressive movement.  She had been the central part of a black community group that persuaded Ron Dellums to run for the City Council in 1967, launching his political career.  Now Maudelle would win her own place on the Council in 1984 and become the left’s solid rock.

Maudelle was 73 years old at the time of this 1984 race, by far the eldest on that BCA slate.  But she outlasted everyone else.  Continuously re-elected,   Maudelle served for 20 years on the Berkeley City Council, until 2004, breaking every modern record for unbroken longevity in city office.  At some point after her 90th birthday, she was considered to be the oldest elected official in California, perhaps even the nation.

How to properly honor Maudelle’s service was the issue in 2005.  Congressional Republicans blocked the naming of  Berkeley’s main post office after her, proving that the blacklist for leftists is still alive in Washington.  The Berkeley City Council then decided to name old City Hall after Maudelle Shirek as a fitting tribute.

Ann Chandler, a public health professional, also took the lead on other issues, including gay rights.  She introduced ordinances to ban cigarette smoking in public places and prohibit cigarette vending machines.  Berkeley set an example for the anti-smoking movement.    Ann had been a key leader in the BCA organization for many years, helping, raise funds, and doing whatever was needed for BCA to survive the bad times.

On November 6, 1984, with the largest turnout in recent memory, the entire BCA slate swept to victory, crushing three conservative incumbents.  Thanks to consecutive November triumphs, BCA would now have an 8-1 City Council

It was a success story beyond anyone’s wildest dreams.
3. District Elections (1986)
The new Berkeley City Council majority was not particularly charitable to its opponents.  Neighborhood people who were against the Council’s low-income housing projects felt insulted by some BCA Councilmembers.  Their anger led to an initiative charter amendment under which eight Councilmembers would be elected by district instead of at large.  Their terms were cut from four years to two years.  Only the Mayor would continue to run at large for a four-year term.  The initiative also established run-off elections whenever the leading candidate failed to receive a majority of all votes cast.  (Run-offs had previously been proposed twice before by the conservatives and defeated both times by Berkeley voters.  District elections themselves were traditionally seen as progressive, especially in San Francisco, where conservatives opposed them.) 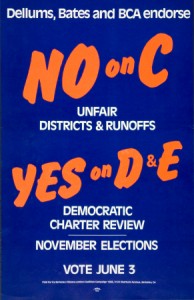 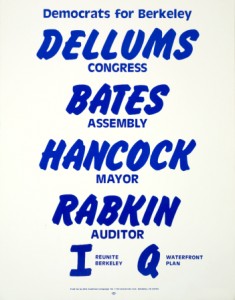 The 1986 Berkeley District Elections Initiative gerrymandered the campus community into several districts so as to make election of a student highly unlikely.  It became a partisan measure strongly backed by hill conservatives who felt un-represented after two consecutive defeats.  In June 1986, only the Berkeley hills voted for district elections.  But that was enough for the measure to pass, given low turnout in the campus area and west Berkeley.  The era of slate politics was over and neither side could realistically hope for more than five or six seats.
With district elections, city-wide political organizations became significantly weaker. Candidates generated their own organizations and campaigns.  Yet the two-party system survived.  A pair of  independent candidates were actually elected, only to later be defeated by party stalwarts running to their left and right, respectively.   Loni Hancock returned to Berkeley politics and was elected Mayor in 1986 and 1990 (after a very close run-off including litigation over disputed late absentee ballots).  Loni helped BCA maintain a very thin, unstable progressive majority into the 90s.  Hoping to create a stronger new coalition, she publicly called for BCA to disband, which the organization refused to do.

Shirley Dean’s election as Mayor in 1994 gave BDC its first majority in eight years.  Dean actually lost in November to her BCA opponent, former Councilmember Don Jelinek.  But Jelinek failed to receive a majority, and Dean won the December run-off with a much lower turnout.  Then in 1996, BCA candidate Margaret Breland defeated BDC incumbent Mary Wainwright in Southwest Berkeley (District 2).  The resulting nominal 5-4 BCA majority continues to co-exist unhappily with Mayor Dean, who won her own November 1998 race for re-election in a re-match with Don Jelinek.

As a 2001-2002 distant observer, the Berkeley City Council seems to be a quieter, less passionate forum than the Council of my youth in Berkeley of the 70s.