David Mundstock was a senior staff counsel in California Energy Commission in Sacramento from 1980 to 2002. He has been known as “The Intrepid Berkeley Berkeley Explorer” since 1990. He worked in Berkeley politics from 1970 to 1977. Starting from 1970s, Mundstock keeps to record and update Berkeley politics especially campaigns using videos, images and texts. He was also a BCA member in 1992. See below for details of his life: This record of the History of Berkeley politics was reposted here with his permission 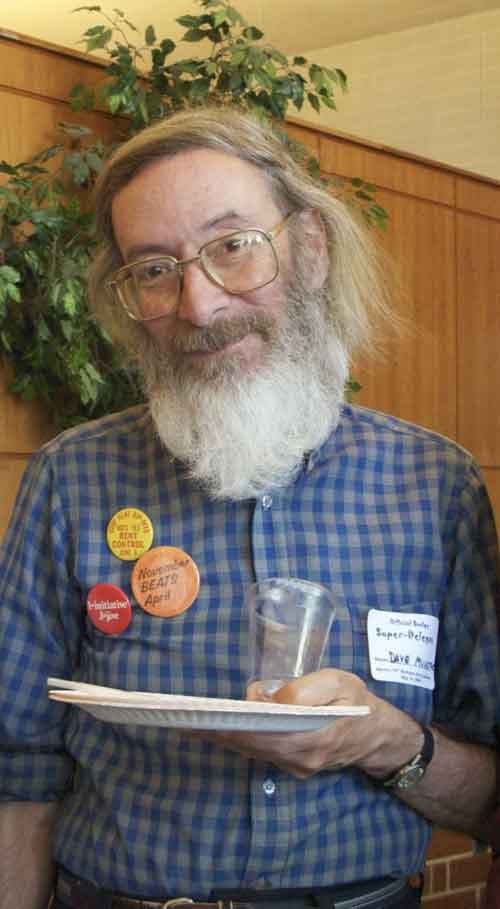 David Mundstock, a progressive political activist, world traveler, Cal and UC law school graduate and historian of Berkeley electoral politics passed away August 28th at his home in Berkeley. David was 72 and his sudden death shocked his family, the members of his longtime walking group and the numerous other friends he made over the decades he lived in Berkeley.

As a UC Berkeley law school student in the early 1970s David played a key role in organizing Cal students to become a major constituency of the progressive coalition that elected the first representatives of the “new politics” to the Berkeley City Council. Throughout the 1970s David attended every meeting of the Council and recorded the dynamics and personal relationships as well as the votes. As a volunteer, he worked on every election campaign, from registering voters, to “sniping” campaign posters to cruising Berkeley in a “get out the vote” sound truck on election day, to devising campaign strategies. He was passionately committed to the idea of Berkeley as “a place where things begin.”

From my years as a Berkeley city council member in the early 1970s, to serving as Berkeley’s mayor from 1986-94, and later serving as a member of the California State Assembly and State Senate, I appreciated David’s support and ideas. Nancy Skinner, now a member the California State Senate, credits David for being an early political mentor. “David was one of the first people involved in local Berkeley politics that I met when I arrived at Cal in the 70s. He taught me and my friends how to register students to vote with an ironing board and many clipboards, that we’d set up in Sproul Plaza. Had I not gotten sucked into the orbit of David, being elected the first student to the Berkeley City Council, to my political career to today, would have never happened. David you were a true mensch!” And former Berkeley City Council member, Ying Lee, stated: “David had a prodigious memory and was a walking archive of Berkeley political history. He was largely responsible for my candidacy and election to the Council.”

In Berkeley’s April, 1973 municipal election, David’s imaginative efforts included placing a marijuana legalization initiative on the ballot. In coordination with the initiative, he helped organize a raffle with a kilo of marijuana as first prize. David was actively involved in the campaigns to establish rent and eviction control in Berkeley, and was one of the few who recognized that switching Berkeley municipal elections from April to November, to coincide with state and federal elections, would vastly increase voter turnout as well as save the city the cost of an extra election. The April to November election date change was approved by Berkeley voters in June, 1982 and following the November, 1982 and 1984 municipal elections, 8 of the 9 elected Berkeley City Council members were progressives.

David’s detailed first-hand account of Berkeley progressive electoral politics in the 1970s is an invaluable resource for Berkeley historians. He also amassed an extensive collection of political posters, buttons and other election memorabilia.

David’s history of Berkeley’s electoral politics in the 1970s is here:

David traveled extensively throughout the globe, visiting over 70 countries, from Argentina to Zimbabwe. As the “Intrepid Berkeley Explorer,” he documented his travels with photos and videos that rival those of Rick Steves. David regularly hosted screenings of his travel videos for friends at his home. His travel videos, with his quirky commentary, are available at his YouTube channel, where they’ve had hundreds of thousands of views, as well as at his own travelogue website.

An only child, David was born in Canada where his father had immigrated after escaping from Nazi Germany at the last minute, before it became impossible for Jews to leave. His mother’s family, also Jewish, had immigrated to Canada from Lithuania earlier. David’s parents moved to the U.S. when David was 3-years-old and he was raised in San Francisco, attending George Washington High School. As an alumnus, he was active in the efforts to preserve the Victor Arnautoff “Life of Washington” murals at the school. After graduating from UC Berkeley’s law school, he worked as an attorney for the State of California Energy Commission from 1980-2002.

David was truly a Berkeley original. From his singular fashion sense to his dry wit he exemplified the “sui generis” individual that makes Berkeley such a unique city, politically and culturally.

Donations in David’s memory may be made to the American Civil Liberties Union (ACLU), East Bay Community Law Center, People for the American Way.

Berkeley in the 70s http://berkeleyinthe70s.homestead.com/index.html